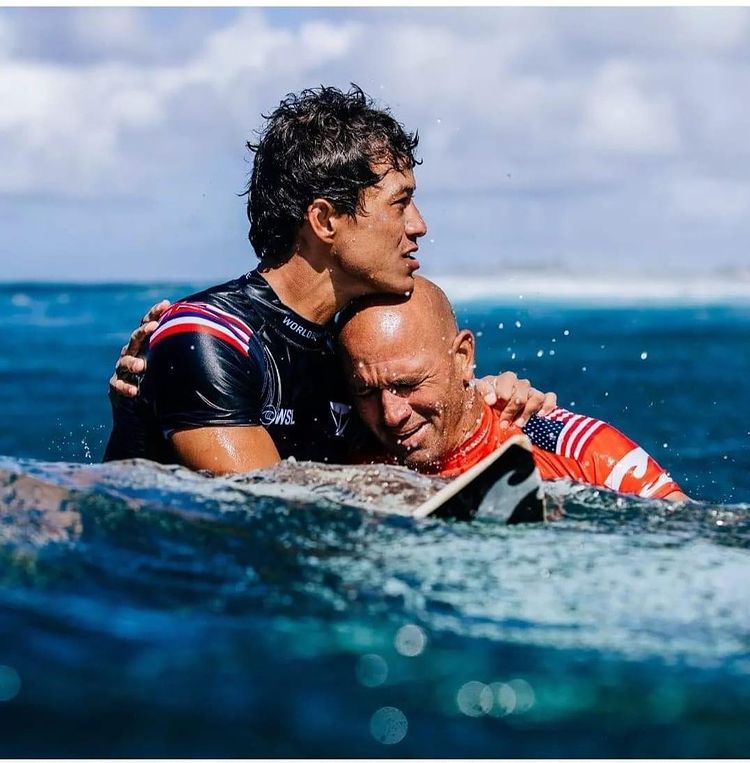 Today saw the greatest sporting triumph in the history of any professional sport: Kelly Slater besting the world’s best surfers to win the Billabong Pipe Pro – the world’s gnarliest and most prestigious surfing contest – a week shy of his 50th birthday.

If you haven’t watched it already, check out World Surf League.

Kelly’s lessons for businesses, brands, everybody

Three things stood out for me immediately. So this is my three cents. Jumping on the Kelly bandwagon because, like every 40+ surfer on the planet, I’ve been seriously inspired.

1 – Age alone made Kelly the underdog

It’s funny to think of the GOAT (Greatest Surfer of All Time) as the underdog going into this event. Kelly is an 11-time World Champion, was a 7-time Pipe Master before today, and has been absolutely ripping in clips released throughout 2021.

But underdog he was. Why? In large part because he is the oldest competitor on tour. Which is insane, and illogical, because we’ve seen recent footage of him surfing Pipeline as good as the very best local chargers (John Florence, Seth Moniz, Barron Mamiya).

Yet somehow, Kelly’s age became the dominant factor in our reckoning of him. It’s all anyone was talking about. Everyone, it seems, except Kelly – who just went out and did his job.

The business lesson? We’ve all seen ageism in the workplace. It’s ugly, and its perpetrators can be young or old. But next time you hire, look for the special someone who is excited by life, whose experience demonstrates their commitment to lifelong learning in myriad forms, who’s out there charging 12-foot Hawaiian barrels because it’s a gnarly, if not fun thing to do.

Kelly’s feat today transcends surfing and even sport. It was the accomplishment of a lifetime. His first return to the podium since 2016. Kelly declared today’s win his best ever. I bet they all feel like that in the moment of victory. Not that I’d know, of course.

All I know is that I cried earlier in the week when Kelly squeaked through the quarters against Barron Mamiya, who was the early standout of the event, catching the winning wave with 4 seconds left on the clock. When Kelly choked up in his post-heat interview I shed another salty tear along with him.

Today was emotional, too. Kelly seemed to be having a spiritual epiphany on camera while he was being interviewed having just been “chaired” up the beach by a buddy and Seth Moniz – the guy he’d just beaten in the final. It was beautiful. Insane. Glorious. Life-affirming.

But when WSL commentator, Rosy Hodge, remarked how emotional it was, her male counterparts completely glossed over it. It was surprising. And it made me think that if Barton Lynch had been on the panel then we might’ve seen a grown man cry, which would’ve been good for the WSL, for Barton, for surfing, and for men in general.

Kelly cried. Good leaders know that tears are not weakness. Women know it. As do boys. Maybe it’s time for men to re-learn what makes a man. We can cry it out together.

3 – Real is always the deal

You couldn’t make up what went down at this year’s Billabong Pipeline Pro.

Epic, glorious waves. Kelly besting young guns half his age – making it through the quarter-finals thanks to a last-second wave sent by the gods. Seth Moniz defeating the greatest ever Pipe surfer on his route to the final. Kelly and Seth hugging it out before their battle. An amazing final. Death-defying surfing. Wipe-out obliteration. Crowd eruption with 10 minutes to go. More drama than Broadway. Manic last minutes. That crowd. Seth’s family. Kelly’s water splashing. Strider from the water. Pure energy of the most photographed surf break on the planet. Seth carrying Kelly up the beach seconds after he lost. Kelly’s out-of-contest experience live on air, revealing the triviality of surfing contests, the fragility of all things. In memory of Andy Irons. The legend’s son.

Contrived the contest may have been, as all competitions must be, but there was nothing fake about today’s broadcast. Watch it and see for yourself.

Today is a reminder that the stories that resonate most are always the real ones. When people speak or act from the heart. When they drop the facade and just do as they feel – as they, uniquely, were born to do. I guess this is the root of that cliche, Living your best life. It’s about being genuine. Genuinely you. Me. Us. Seth. Kelly.

One day, brands will realise they don’t need to make up stories. They just have to look inside and pull the truth out of themselves. Unless there is no truth to be teased out. Those brands are in trouble. Because sooner or later the truth always comes out, and what will customers think if the stories they’ve been sold are nothing but lies?

Will Kelly retire after this victory, or will he pursue a mythical 12th World Title? We’re already asking. Kelly’s even asking himself. Because as much as we loved today, we immediately look to the future. Shame on us.

For my fourth cent, I hope Kelly stays on tour and travels the world in a blazing victory lap – connecting with old friends and waves along the way. The way I see it, he can’t lose. He’s already done what few thought possible – win another Championship Tour event – so from here on he can only win. Either he wins the World Title or retires the year he won Pipe. It’s legendary either way. Whatever happens in between will just be magic surfing that will live in the hearts of surf fans forever.