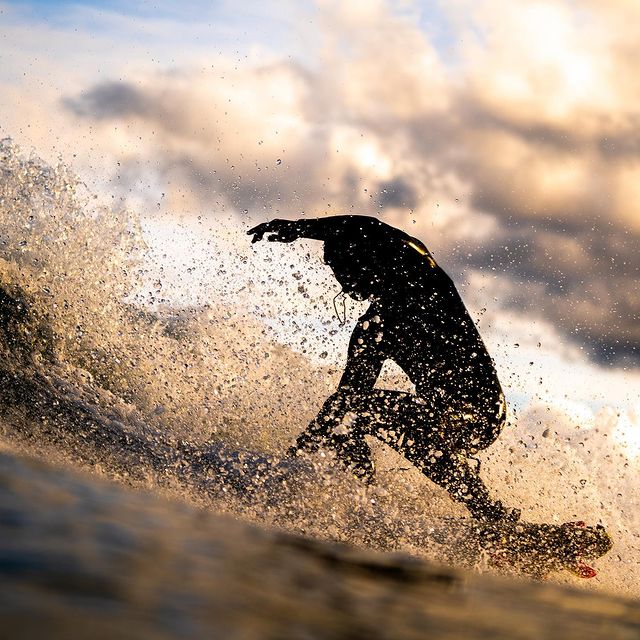 Back in July 2020 we interviewed Great Ocean Road photographer, Katey Shearer – who captured the gorgeous ‘surfer on the dunes’ image on our homepage – and who we think is destined for photography greatness in the water and on land.

Surfing came first, but that was before I took my camera in the water, so I feel like now  I’ve balanced the two desires out.

How, when and why did you bring them together?

I have always had a deep infatuation with the ocean. I never lived close to it, so when I  would visit the big blues it was the most joy I’d ever felt. Then about a year and a half ago  when I moved to the coast I put two and two together. I was like, Hey people take their cameras in the water? Spectacular, I’m doing it.

What conditions are your favourite to shoot and do you prefer shooting in water or on land?

I like Mother Nature to show off her drama to the wildest extent, so clear blue skies just don’t cut it for me.

I love the water. I can’t even  explain how much joy I feel when I have my camera out there. I’ve had a few sessions where I get the same sly comment from local  surfers and strangers: ‘It looks like you got a coat hanger in your cheeks!’.

Shooting in the water, you are taking this device into a place that it’s not supposed to be in. You’re immersed in an element that a camera cannot withstand without its spectacular housings. It’s challenging in the water, always—that’s why I  love it.

What are the challenges and rewards of doing surf photography?

It can be pretty difficult bobbing about in choppy waters trying to keep your camera as steady as a rock, and taking into account the human that is shredding, as well as the wave you need to capture. I am still a rookie in this game so I cannot say it comes easy. When you throw yourself into a pool of fear and doubt the reward is when you get a spectacular shot.

Land photography can be challenging, too. You have to be so attentive to be able to capture that moment when it comes. I think any challenge is filled with a reward no matter the outcome.

What are some of the most memorable, or maybe even life-changing  moments that you’ve had behind the lens?

When I did a surf trip down to Tassie (Tasmania) a year ago, I got a camera-housing a few months before but I suffered a pretty rough shoulder injury so I hadn’t taken it out all that much. My shoulder finally healed just before the Tassie trip. We found an incredible surf spot amongst sand dunes and cliffs, and it was the first time I really went out with my new housing. It was winter, my hands were freezing, and the photos were terrible, but it was that trip that made me realise—this is exactly what I want to do.

You’ve been shooting a lot during the cold Victorian winter – do you do any specific training (I’ve heard it’s full-on trying to maintain position in the line-up)?

I make sure I keep myself relatively fit. The waters down here can be pretty tough to swim  out in with intense currents and strong winds. I just try to swim, photograph, and surf as much as I can. I’m not really interested in the gym though! It seems a bit absurd to work out in a room filled with mirrors and bad music. But each to their own.

It’s perfect waves – do you shoot or grab your surfboard?

If I haven’t surfed in three weeks! Which means I’m a bit grumpy, so I surf. If I know I’ve been giving into the glide over the capture far too often then I’ll go capture, or both. But capturing photos first and then taking the surfboard for a spin is the ultimate day for me.

Describe a typical (or your favourite) type of surf shoot.

I don’t think there is a typical day for me in the water. Every time I go out, it’s different. Sometimes when the surf is terrible, I go out with a friend and try to get as close as possible without getting my head sliced off. Sessions like that can be the most fun. The best time of day to shoot is usually sunrise or sunset. Summer I could shoot for hours, but it’s the middle of Winter at the moment and my fingers last about an hour. The kind of shot I’m after depends on where I am, who I’m with, and how I want to capture them and incorporate the landscape.

How do surfers respond when they see a photographer in the water?

It’s different everywhere. At secluded spots, it’s a bit ‘attitude fickle’, you never know  how someone is going to react. So I generally only go out if I have someone I intend on  shooting.

We found the subtlety of your images refreshing and unique – what do you  think makes your work original?

I want my work to come from my eyes, my heart and no one else’s. I try not to be too  influenced by others, which is tricky these days with the pressures of social media.  It’s easy to get caught up in what others are doing, and what you see the industry wanting. I like to step away from it, and capture the world the way I see it. The way I see a moment.

Do you conceive of the end result before a shoot or is it something that emerges  from doing the work?

You know, I always have an idea before going into it, and I always come out with a better  one; or the one I went in with totally shit in my face! On the spot, in the moment creative  juice is my kinda drink.

There are a few photographers who I am quite inspired by at the moment. Though they  tend to change as I discover new artists. One that has really drawn me in is a woman  from Tasmania, Renee Thurston. She captures ‘feeling’ incredibly. Her work is dark and raw. I also adore Katie Rae from the UK. Her work is delicate, and simple, and so  beautiful I can never get enough of it. Another that has been someone I’ve looked up to  from the beginning is Chris Burkard. His sense of adventure, telling a story and  combining so much in a photo in the simplest of ways is absolutely mind blowing.

What drives you to set up the camera on a beach before dawn, or jump in the water  in cold/challenging conditions?

Nature. I love everything about it. Being outside amongst it all is so enthralling and  addictive. Some mornings, putting on a cold and wet wetsuit, all I’m thinking about is the  warm bed I’ve left and what the hell am I doing. But then, as soon as I get my gear  together and get in the water, I feel the most alive I’ve ever felt. I could never get sick of it  because every experience is different and wild.

What are the dangers, how do you deal with them, do you think about them?

I haven’t really got myself into any sticky situations yet. I feel like a confident swimmer in the waters I tread at the moment. I’m working on building some body and mind strength to conquer some of the bigger stuff. How big? I guess we’ll see. If I ever feel a  sense of fear going out photographing a spot I haven’t been out in before, or it looks a bit sketchy and my gut is telling me ‘eeekk’ then I like to surf it first. I can paddle around where I might sit, and get a feel for the wave and the waters. Otherwise, I just wing it and hope for the best. I never think about the million things that could go wrong when I’m in the water.

Is there a tight-knit crew of surf photographers out there or is it a lonely pursuit?

Not many, or any, where I’m from, but a bit further up the coast there are a few guys who are absolute legends and I’m slowly trying to seep my way into their crew 😉 I guess I also haven’t really broken through the big scene yet to know any other surf photogs, but I’m sure it’s a spectacular community.

Is it different shooting female and male surfers?

Nah, they’re humans doing the same dance – all in different styles and both have an abundance of stoke.

You’re female and you’re a surf photographer – is there anything you want to say  about that?

I do have a vagina and a camera. I’ll say that so far, so good. No problemo on the gender  side of things. I always feel looked after in the water, especially with the locals. Most guys  are just stoked to have some lady jazz spreading in the water.

Where can people find your work?

They can come have a cup of tea with me and I’d love to talk to them about it – I love tea and connecting with people. I have an old cream van that has Katey Shearer  Photography written on the side. If you see it, come say a big ol’ hi! Exhibitions are announced on my website and through my insta—currently none because of the current corona shit storm that is stinking up in the world.